Prestressed octet trusses have great potential for car bumpers and helmets. To handle a variety of impact forces, use layers with different degrees of prestress. The outer layer is highly prestressed but designed to fail with small impacts. Larger impacts blow through the layers one by one, with each layer redirecting some of the forces.

Tensegrity trusses are much stronger than equivalent space frame trusses

(Feb 21, 2017) It is a good coincidence that you contacted me now as I am preparing to write a paper for a conference partly to do with tensegrity mechanisms for use in extreme environments which requires me to first define at least superficially various kinds of tensegrity trusses. To turn a tensegrity structure into a tensegrity mechanism requires a scheme to relax or inhibit triangulation in a controlled manner. This in turn has caused me to think at length about the differences between tensegrity trusses and space lattices of the types you enumerate. Primarily triangulation in tensegrities is achieved through tension. The struts are islanded within the tension network such that force vectors are almost instantaneously passed from a compression member into the tension system through multiple paths. This suggests that Euler’s column buckling formula is circumvented as forces are dissipated to the entire structure long before any one strut is in danger of failing. For this reason tensegrity trusses are much stronger than they look and much stronger (given appropriate materials) than equivalent space frame trusses. (I fell down my steps a couple of years ago about 5 feet onto some rocks. A rather large 3′ diameter tensegrity I was carrying broke my fall the way a balloon might and only one strut broke. I weigh about 180 lbs!  Astoundingly it was made of 5/16″ dowels 8″ in length and elastic cord!) 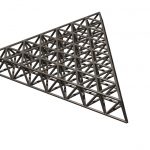 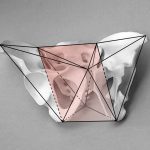 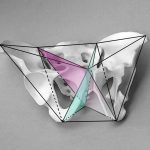 Reasons for using an octet truss to model a pelvis

(Feb 22, 2014, repeated from Models of Body Parts: Pelvis, Arm, Leg, Foot) My pelvis model is based upon direct observation of the shape of the ilia, (they are clearly tetrahedral) and their relationship to each other and the sacrum which together form an octahedral space and thus collectively is an octet truss. The dihedral angles in octet trusses are greater than 90 degrees (109.47) and thus forces are directed more efficiently through such a structure. 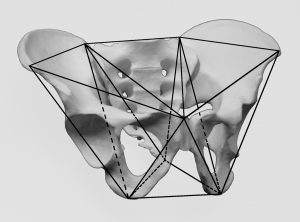 A closer look at the pelvis suggests that ilium and the sacrum together can be usefully modeled as a section of an octet truss. END_OF_DOCUMENT_TOKEN_TO_BE_REPLACED

A helmet should connect tensegrally to a neck/shoulder brace

(March 6, 2014) Re: the tensegrity helmet – a slightly longer search yielded this article which is worth reading in its entirety.  I think the response to the theory that a neck collar is a better response to brain injury than a helmet is pertinent. The core argument that a collar that puts pressure on the external jugulars would keep more blood in the brain thus ‘floating’ the brain more effectively against high velocity force transmissions is challenged and the argument is made that if our bodies are tensegral we should look to study how the body redirects forces. The conclusion is a design for a helmet that connects tensegrally to a neck/shoulder brace support to redistribute forces such as this Hans brace.

There seems to be merit in this analysis but the result is a device that  looks heavy, uncomfortable, hot and bulky and is used primarily for motor sports.

(March 6, 2014) Years ago (1991) I did research on wafer panels based upon tensegrity architecture. The panels were built from sheets of pyramids arranged in grids such that laminating layers together would result in octet truss arrays.   The sheet material corresponds to the tension membranes in a tensegrity structure and the origami-like folds that nest together create geometrically ordered struts or compression members that are linked similarly to Class 2 tensegrities (Skelton’s nomenclature).

I had originally speculated that a tensegrity bumper on a car that was designed to fail catastrophically when there was a collision might redirect forces rapidly enough to prevent serious injuries to occupants. Further thinking led me to build a number of prototypes built from epoxy impregnated laminated layers of these pyramidal sheets (which became of interest  briefly to an aerospace company as a possible design for an advanced airframe envelope). It turned out the concept had already been discovered and there were a number of patents filed in the 60’s and 70’s but no applications were developed then.

(March 6, 2014, continued) It occurs to me that there might be merit in following this path a bit further with regards to helmet design as the concern is similar. Octet trusses work so efficiently because they have 6 axis pattern in the array as opposed to for example 3 axis in a cubic array.  Six axes means more paths to redirect forces. When multiple array layers are combined into a material, the forces that propagate from the source collision can easily follow multiple paths down into the material, along 6 axes but also at dihedral angles along branching pathways. If the octet truss is stiff enough, but not too stiff, perhaps it can fail at just the right speed to reduce high velocity impact forces. Tensegrity structures potentially have this quality if the prestress is just right. So an octet truss based material that had a degree of prestress built into it may perform as required, but this is an advanced material that doesn’t exist today. Standard honeycomb wafers are not the answer here because they have no lateral stability and thus fail too easily. And as someone who worked in industry with a hard hat on I can tell you, it saves you a lot of lumps and bumps but can’t react fast enough or efficiently enough to save your head from a  catastrophic impact.  A material that has the features that I’m talking about would be a micro-material based on the close packing of spheres. In other words, octet truss micro bubble wrap with highly inflated spheres.

Dispresion tree in an octet truss

(June 6, 2018)  Regarding designing a better model for describing rapid impacts and the design of helmets I have some interesting ideas about nodal arrays and how they can disperse forces. For example with the advent of 3-D printing it is possible to build multiple layers of octet trusses at a very fine scale. An octet truss has six axes of dispersion coming together at each nodal point. Close packing of octahedrons and tetrahedrons create this geometrical array. The axes pass through nodal points at angles of 120°.  If a force travels down an axis,  when it reaches a nodal point it has five axis as pathways all deflecting at an angle of 120° which is much more efficient than a cubic array which has only three axes all at 90° from one another.  Imagine a helmet made of multiple layers of this octet truss which is designed to fail by dispersing forces rapidly from layer to layer. Assuming a force travelling down a single axis – it reaches a nodal point and deflects along five axes which then upon reaching the next five nodal points deflect again along 25 axis and so on depending on the number of layers.  Actually, the increasing number of pathways would not multiply exactly by five because several layers down the same pathways would be activated from several different origins one or two layers up.  I’m sure you could write the mathematical description of this dispersion tree. I hope to build an octet trust array in Sketchup and show this dispersion tree soon.  The advantages of an octet truss Is how efficiently it disperses forces and how little material it needs so it is light and strong. Using the right type of material we can design it to fail at the right acceleration dispersing rapid impact forces much more efficiently than any other structure.

(May 26, 2014) As I suggested before when this topic came up – a highly prestressed tensegrity will transmit forces quicker that a low tensed system as there is less dampening involved. Different degrees of tension seem called for depending on impact forces. My best guess for a tensegrity bumper or helmet is to have a number of (disposable) layers each one tuned to different ‘frequencies’.  i.e. the outer layer can be highly prestressed but designed to fail with small impacts. Larger impacts blow through the layers one by one, with each layer redirecting some of the forces. Highly prestressed tensegrity arrays arranged as octet trusses redirect forces at  angles greater than 90 degrees (120 degrees along the vectors and 109.5 degrees along the dihedral planes). The higher the prestress the more rapid the transfer of forces. Think of layers of highly inflated micro-bubble wrap arranged in square grids that nest into each other and conform to a curved surface like a helmet. (This creates the geometry of an octet truss.) The trick is to design the material so that it collapses – a controlled failure mode. It has to fail at just the right speed and impact – otherwise too much of the force gets transferred inward to the inner layers – and eventually your head. Octet trusses are the preferred geometry because in addition to the deflect angles they have multiple vector paths of failure.