Three genres of tensegrity masts are created using different geometries: X masts, Fuller masts, and spiral masts. Tensegrity masts can shift shape and change stiffness. When circumpherential forces are applied, the mast becomes longer and stiffer and acts like a compression member that is able to bear significant loads. Fascia around a joint resembles a helical tensegrity mast, creating a compression sleeve that can alter compliance and stiffness as needed.

In The Bones of Tensegrity (2012), Tom describes three genres of tensegrity masts. In summary, an X mast  is composed of X forms rotated 90 degrees to each other and suspended by means of a tension sling and attendant stabilizers; a Fuller mast is composed of stellated tetrahedral forms reminiscent of vertebral bodies suspended one above the other by similar means; a spiral Snelson type mast is composed of chiral tensegrity prisms stacked in a variety of ways, either clockwise, counterclockwise, or interwoven with each other. Kenneth Snelson describes spiral mast construction in Tensegrity, Weaving and the Binary World.

Youtube video (Aug 25, 2009) A three fold tensegrity spiral mast composed of wooden struts and an elastic tension net is actuated by using three vertical control lines.(six control lines give a greater degree of control however). Given the proper ratio of elastic tension to non-elastic control lines, such a mast demonstrates multiple degrees of freedom and a wide range of motion. Applications include robotic appendages that work like the Canada Arm on the International Space Station, prosthetic devices and exoskeletal support systems. Additionally such a mast illustrates the force vectors active in living forms such as an octopus, an elephant trunk, or a cat’s tail for example. Such a mast also schematizes how fascial support in the spine can assist in lateral and rotational movement but also provides stability by stiffening the mast when required by tightening the control lines.

Youtube video (Sept 4, 2012) This tensegrity mast is animated by three actuator lines that control its orientation in three dimensions. The three fingered ‘gripper’ is controlled separately by a single actuator. The gripper is built from ‘tensegrity joints’. All forces are pin loaded with no shear or torque and are mediated by the tension system. This model is controlled by human manipulation but could of course be actuated by computer algorithms.

Tom describes a tetrahedral and a spiral vertebral mast his web page Biotensegrity Models. His reference sheet discusses the biotensegral modeling of the spine provided by these models. 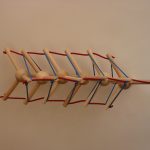 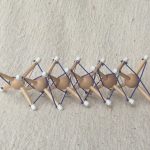 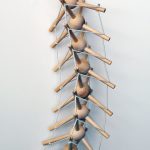 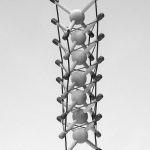 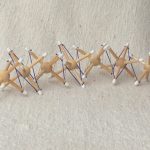 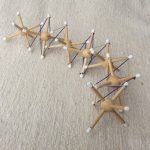 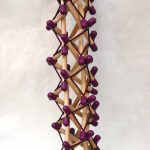 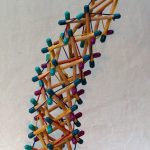 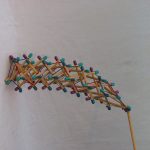 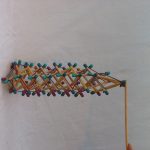 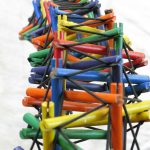 The Bones of Tensegrity (2012)  These tensegrity masts have interesting properties, they can act like a spring, compressing under load but, unlike a spring they can also self-extend. By applying circumpherential forces to segments of the mast, e.g. squeezing or constricting the mast laterally, they narrow, becoming longer and stiffer, acting like a compression member and are able to bear significant loads. When the load is released it becomes more flexible, bending and shortening. This is because the weaving pattern forms four-fold rhombic facets which are free to shift shape, scissoring open and flexible, or closed and stiffer. When these facets are banded laterally, they become triangulated and the entire structure stiffens completely.

The Bones of Tensegrity (2012) Tensegrity masts and these equivalent structures are built around a hollow core. Thus their integrity depends upon a level of stiffness in the materials used. But what happens when the hollow core is filled? Plastic water bottles are much stiffer if they are full than empty for example. Squeeze the bottle and water wants to squirt out the top. Screw down the cap tight and you have a compression column able to withstand considerable forces.

Fascia around a joint resembles a helical tensegrity mast, creating a compression sleeve that can alter compliance and stiffness as needed

(April 28, 2016) My answer to the problem of tensegrity modelling of joints in vertebrate bodies has been that fascia resembles helical tensegrity masts with incomplete triangulation that is adjustable on the fly. It wraps long bones, the muscle spindles that connect them and envelops joints, creating a compression bandage which keeps the bones floating within it. These act as possible compression sleeves which can alter their compliance and stiffness as required in real time allowing the possibility of articulations and yet keeping the bones separated. (I made the argument for this in my paper ‘The Bones of Tensegrity‘.)

In a tensegrity mast a joint is normally seen as a disjoint – a failure in the integrity of the geometry of the structure. A broken blade of grass illustrates how a tensegrity mast acts when it has lost some of its tensional triangulation in a localized area. It becomes un-integral and eventually fails forming an un-intensional hinge.

Fascial sleeves can act in the manner of helical tensegrity masts which alter their tension system to allow for articulations like the spine and even more abrupt and acute joints such as the knee or elbow. This has to mean that the triangulation needed to stabilize any structure can be adjusted as needed. Helical masts look and act like braided rope or wire (see Snelson’s paper on tensegrity’s relationship to 3D weaving patterns) except that they can stiffen into a rigid form as well as bending or coiling like rope.

Youtube: Tom Flemons in conversation with Steve Levin ©2005 Steve Levin. Many parts of this video relate to tensegrity masts. At 6:20, the mast moves in mysterious ways – this is in response to Tom’s left hand under the table pulling on the control cables that run through the middle of the mast. At 8:25 they discuss replacing each component (each wooden dowel or elastic band) in the icosahedron by a mast; a mast can be used either as a tension or a compression element. At 9:00 they show that the mast can be used to model a dinosaur’s neck, a bird’s neck, an elephant’s trunk, a cat’s tail etc. At 13:10 they discuss that bicycle wheels are tensegrity structures; Tom later built the following models to illustrate this. 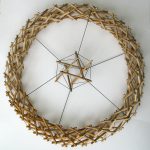